Another little environment pic I did. In retrospect, I'm sure it was at least partly inspired by the wonderful 'Game of Thrones' series starring Sean Bean. Although I never looked to it for reference, there's a scene in there where Jamie Lannister (the Kingslayer) waits for Ned Stark outside of what might have been a brothel? I wont spoil the exchange that happens between them in case you havn't seen it yet, but it's a great scene.

I'm a big fan of the series (A Song of Ice and Fire). I began reading George R R Martin when the first book came out and I was stoked to see it realised so well. I'm pretty excited to see the next series of the show. My only complaint about the show is how fast it moves. Obviously you have to make sacrifices and changes to make compelling viewing, but I felt a little that you lost sense of the size of the world. Logistics and travel times are a big issue in medieval times and in the interest of pacing that was often ignored, though it has a big effect on the course of events. I'd be happy to watch 15 or so episodes per book to get a little more detail in there. But if all I can complain about is that it's not long enough, then you know you have a fantastic show :) 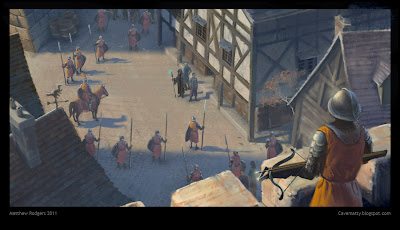